First elected as a Labour councillor whilst still in his twenties, Ron Whittaker served the Throop and Muscliff (previously Moordown North) ward for nearly 44 years.  Citing his dislike of party politics, he stood as an Independent after a few years and regularly topped the polls at election time.  He also served on Dorset County Council from 1973 to 1997.  He was mayor of Bournemouth in 1993-4 and was awarded the freedom of the borough of Bournemouth shortly before his death in 2015.

He was a dogged and popular local campaigner, well known for bombarding council officers with letters on behalf of his constituents, and espoused a range of issues from the Winter Gardens to the future of Throop Mill.  Always passionate about planning, he became vice chairman of the borough’s planning board. 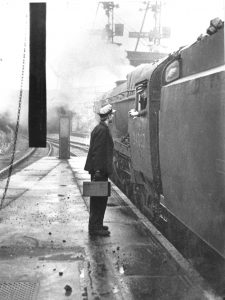 Ron Whittaker (on platform) in his days as a footplate fireman

Born in Boscombe, Ron Whittaker left Oakmead School to work first on the railways, during the last days of mainline steam, before commencing a career with Dorset Ambulance Service.  The mayor of Bournemouth, councillor John Adams, said at the time of his death in 2015 “I am very saddened by the passing of my dear friend Ron.  He was a true gentleman, and was indeed an exceptional councillor, serving his constituents with all his vibrant energy”.